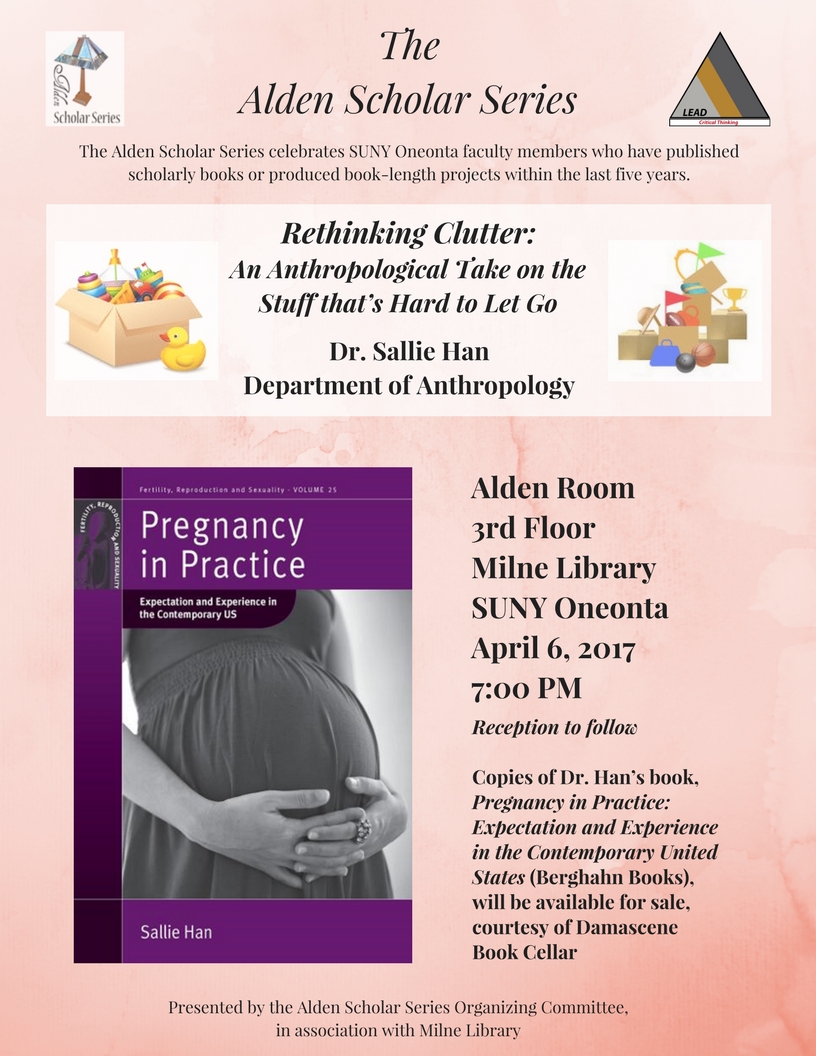 Rethinking Clutter: An Anthropological Take on the Stuff that’s Hard to Let Go

About the talk: Things matter very much to the people who make, use, own, covet, hoard, hide, exhibit, discard, borrow, steal, and give them. Attending to objects provides an opportunity to glimpse the joys, delights, prides, pains, sorrows, fears, and hopes that people experience in their everyday lives.

In this talk, cultural anthropologist Sallie Han considers the stuff that is neither affirmatively wanted nor actively rejected—in a word, clutter. The accumulation of clutter today is interpreted variously as a sign of materialistic extravagance or of extreme frugality, and even of psychological comfort or discomfort. While clutter is privately experienced, there has been increasing public concern with it. Marie Kondo, the author of the best-selling book, The Life Changing Magic of Tidying Up, was name one of Time magazine’s “100 most influential people” of 2015.

The talk will discuss clutter from the perspective of cultural anthropology. Topics will include the long-standing interest of anthropologists in material culture, in particular the recognition of special relationships between things and people, and the uses of things to stand for (and stand in) for people. Han will discuss examples from her previous work on pregnancy and parenting—the stuff and gear associated with contemporary American infant and child care—and from research she is currently developing. Tentatively titled “Clutter Tours,” the project, in collaboration with Dr. Britt Halvorson at Colby College, will involve public participation in documenting their clutter, photographing and sharing the images via social media.

A reception will follow the talk. This event is free and open to the public. LEAD credit available for students. To complement the lecture, the library will display a selection of related books and clutter from the speaker’s personal collection.

About the speaker: Sallie Han is an associate professor of anthropology at SUNY College at Oneonta, where she teaches courses in cultural, medical, and linguistic anthropology. She is the author of Pregnancy in Practice: Expectation and Experience in the Contemporary in the United States (Berghahn Books).

Han, Sallie. 2013. Pregnancy in Practice: Expectation and Experience in the Contemporary US. New York: Berghahn Books.

Kondo, Marie. 2014. The Life-Changing Magic of Tidying Up: The Japanese Art of Decluttering and Organizing. San Francisco: Ten Speed Press.