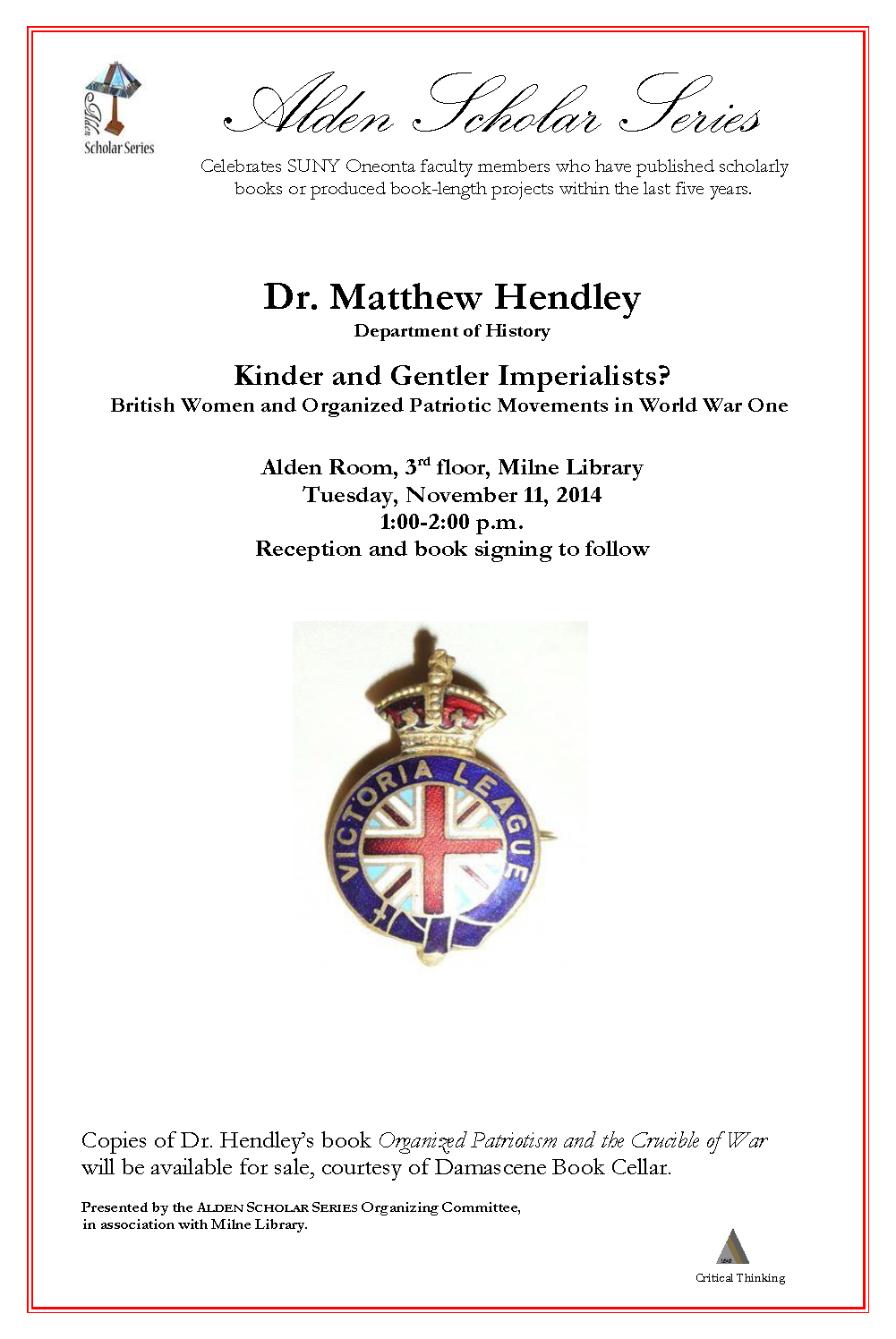 2014 marks the 100th anniversary of the beginning of the First World War. This conflict was one of the bloodiest in Western history and it reshaped the world.  During the next four years, the First World War will be much discussed in the popular media. Dr. Hendley’s book, Organized Patriotism and the Crucible of War: Popular Imperialism in Britain 1914-1932 (Montreal and Kingston: McGill Queens University Press, 2012), is an important contribution to understanding the political and cultural impact of that war on Great Britain. It also combines two approaches to the study of imperialism which are less well known amongst general audiences in the United States – its popular element in Britain and the role of women imperialists.

Patriotic organizations in prewar Britain are often blamed for the public’s enthusiastic response to the outbreak of the First World War. The wartime experience of these same organizations is insufficiently understood. There has been a wide range of historiography written in British History about specific popular imperialist organizations founded during the Edwardian era (1901-1914) and popular imperialism as a late nineteenth and twentieth century phenomenon. Most of these studies terminate with the coming of the First World War or begin after the war is over. Thus, either the war is pointed to as the culmination of previously existing trends of popular imperialism or new forms of postwar popular imperialism are analyzed. Existing cultural, political and social studies of the war itself often look to the war as a moment of continuity or discontinuity with previously existing trends. Nevertheless, popular imperialism is one phenomenon which has generally not been subjected to a similar treatment. There has never been a single monograph which analyzes the impact of the war on a range of specific imperialist organizations. Organized Patriotism and the Crucible of War, is the first book to examine how the stresses and strains of the Great War radically reshaped popular patriotism and imperialism in Britain after 1918.

Using insights from gender history and recent accounts of associational life in early twentieth-century Britain, Dr. Hendley’s book compares the wartime and postwar histories of three major patriotic organizations founded between 1901 and 1902 – the National Service League, the League of the Empire, and the Victoria League. He shows how the National Service League, strongly masculinist and supportive of militaristic aims, floundered in wartime. Conversely, the League of the Empire and the Victoria League, with strong female memberships, goals related to education and hospitality, and a language emphasizing metaphors of family, home, and kinship prospered in wartime and beyond into the 1920s. In effect, these latter two groups were successful by practicing a version of “domesticated imperialism”.

Organized Patriotism and the Crucible of War is a richly detailed study of women’s roles in Britain during the height of popular imperialism, as well as a major contribution to our understanding of the continuities in Britain before and after the First World War.