How to find and use streaming video resources for classes and other educational purposes.

E-mail a question to a librarian and receive a response

Request a Research Consultation to meet with a librarian

Chat with a Librarian using the Chat Box below

Watching, discussing, and enjoying films can round out an educational concept, build community, and spark new ideas. Milne Library is proud to offer the following subscription and licensing services to support SUNY Oneonta's curriculum and mission.

The navigation tabs at the left offer tips for using each platform, and the links below take you directly to the video databases.

Photo by Glenn Carstens-Peters on Unsplash

Can I watch this film with a group?

All videos (streaming and physical/DVD) available at our library may be watched by individuals and in classrooms or clubs (with campus-only audiences) for educational purposes. None of the streaming platforms allow the videos to be shared with a group over a Teams or Zoom link, meaning that group film showings (including in the classroom) must be watched together in person.

When it comes to larger (public) group viewing, however, our film collections each have different permissions based on copyright and licensing rules. If you have an idea for showing a film to a group and you are not sure of the rules, please check the permissions by collection below, or contact OpenAccess@oneonta.edu.

All films* streaming from Alexander Street's video platforms include limited public performance rights, which includes permission for classroom showings, as well as public screenings, as long as no admission is being charged. See Alexander Street Public Performance Rights resources for details.

All videos and materials in Digital Theatre+ may be screened in person for classrooms and campus groups. No DT+ videos can be screened to members of the public. See the DT+ terms of use for details.

All Films on Demand films may be watched in groups in a classroom, club, or other groups (including to members of the public) as long as there is no fee or admission charged and the film is displayed in person. See the FOD Terms of Use for details. 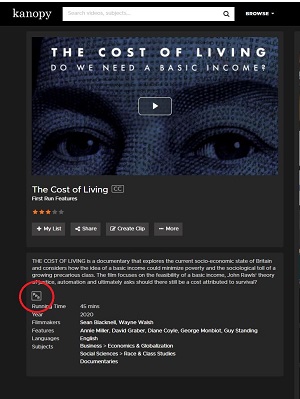 All Kanopy films may be watched in groups in a classroom or club or other campus-only, in-person groups (not public events).

Some Kanopy films allow public performance rights, meaning they can be streamed to a general in-person audience that includes the public, but there are limitations:

Only DVDs in the Milne Collection that are marked with "public performance rights" either in Primo (Milne Search) or on the DVD case may be shown to public audiences.